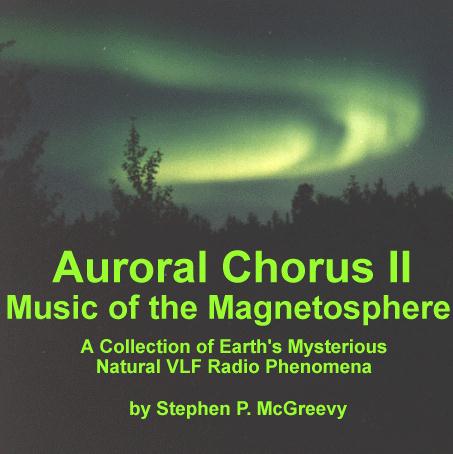 These are the 19 original tracks on the Auroral Chorus II CD, released in the year 2000 by Stephen P. McGreevy (www.auroralchorus.com)
The natural-radio (ELF-VLF audio band) field-recordings on these 19 tracks were recorded in northern, Alberta, Canada (west of Dixonville, AB, and near the Hay River, NWT (at Alexandria Falls), Canada in early June 1996; near the Grass River Provincial Park in west-central Manitoba, Canada in August 1996; and at the Belly River Campground in Waterton Lakes (Peace Park) National Park, Alberta, Canada in June 1998 (including all of the dual-loop "stereo" natural-radio recordings recorded in Waterton in June 1998).
Stephen P. McGreevy - N6NKS
* * * * *
"O' Canada, the True North Strong and Free"" (and free-er and far-friendlier than most -- esp. USA...)  I was granted Honorary CAN Citizenship in 1996 (private CBC ceremony) due to all of my over 30K-km travels throughout western and central Canada between 1993 and 2001 (I've not been back since because I cannot endure lengthy, arduous road trips nowadays, alas).  I'd move northward in a heartbeat as of 2020, but I cannot stand cold-winters anywhere, even in the [yucky] Inyo County, CA desert...).
Oh yeah: Domestic USA spying (NSA/mil./etc. etc.) is a totality and very true, and I have found out I am also a target of surveillance as I am involved in deep ULF-ELF-VLF Research: "we" have discovered that a jamming-out of natural-radio signals is occurring today due to ionosphere heaters globally (former HAARP, etc. - Satanic tech. ruining it all now - down to 1% of the once high amounts, and NO double-hop whistlers nor chorus audible any-longer!  "Silent Spring" is now a near totality now in 2020).  A dead Sun and the just-mentioned human activity: all THAT has resulted in the killing-off of just about ALL natural radio signals once so fabulous and frequent back in the late 1980s when I got into this all... Silent Spring" now permanent in 2020.  {Hey, at least the infamous "Inyo Hum" about 41.3 Hz is vastly diminished...}
Today, I am delving into lightning research/recording. and earthquake precursor signals now that the Magnetosphere has been trashed and is sick and silent...
-----
SpM - Update April 2020...   ...   ...   ...   ...   ...